Coeur d’Alene, Idaho – May 18, 2022 – Timberline Resources Corporation (OTCQB: TLRS; TSX-V: TBR) (“Timberline” or the “Company”) is pleased to report results from two more core holes from the 2021 drilling program at its 100%-controlled Eureka Project in Nevada. These are the final outstanding assays from the drill program, and they include one core hole in the Water Well Zone (WWZ) and the completed silver and multielement data from core hole BHSE-206C – totaling 861 meters of drilling.

The results from BHSE-192C confirm a significant zone of strong gold grades in the WWZ between drill holes BHSE-220C and BHSE-212C, which were reported during the first quarter (see Figure 1 and Company news releases dated February 24 and March 9, 2022).  Highlights of the mineralization in BHSE-192C include:

The Company also received the complete analyses for silver (Ag) and other elements in drill hole BHSE-206C, from which the gold and partial multielement data were reported in a news release dated March 24, 2022. As previously reported, this hole included multiple intervals of anomalous gold, including 7.6m averaging 1.04 g/t and 86.9m of 0.16 g/t. However, the new analyses reveal that the drill hole is more mineralized in silver, lead (Pb), and zinc (Zn) than previously thought. One significant interval hosted by altered dolomite, breccias, and intrusive dikes included more than 202.7m that averaged 5.28 g/t Ag, including 56.4m averaging 9.69 g/t Ag, 0.17% Zn, and 0.11% Pb. This style of Ag-rich mineralization is believed by Timberline geologists to be older than the Carlin-type gold system, likely associated with Cretaceous-aged carbonate-replacement type deposits (CRD).

Patrick Highsmith, Timberline’s President and CEO commented, “Drill hole BHSE-192C is an angled hole drilled into the Water Well Zone from the east. It is one of the first core holes to fill in between the high-grade results we reported last quarter. Our core drilling continues to confirm that the breccias at the base of the Dunderberg Shale are consistently mineralized over considerable thickness, but this hole also encountered strong gold grades in sheared and altered mudstones higher up in the Dunderberg. This result also extends the zone well to the east from previous drilling. Given the encouraging gold and silver associated with the IP anomaly in the Graben Zone farther east in BHSE-206C, we look forward to adding more core drilling in this area during the summer.”

Figure 1 shows how the new results fit into the growing footprint of >3 g/t gold in the Water Well Zone. The long run of highly anomalous silver is also plotted along the trace of BHSE-206C. The IP anomaly occupies the graben between the Lookout-WWZ and Oswego gold occurrences, and it has yet to be tested at depth. Timberline expects to begin offsetting the new high-grade intercepts at the WWZ and near-surface fold at Oswego in June. 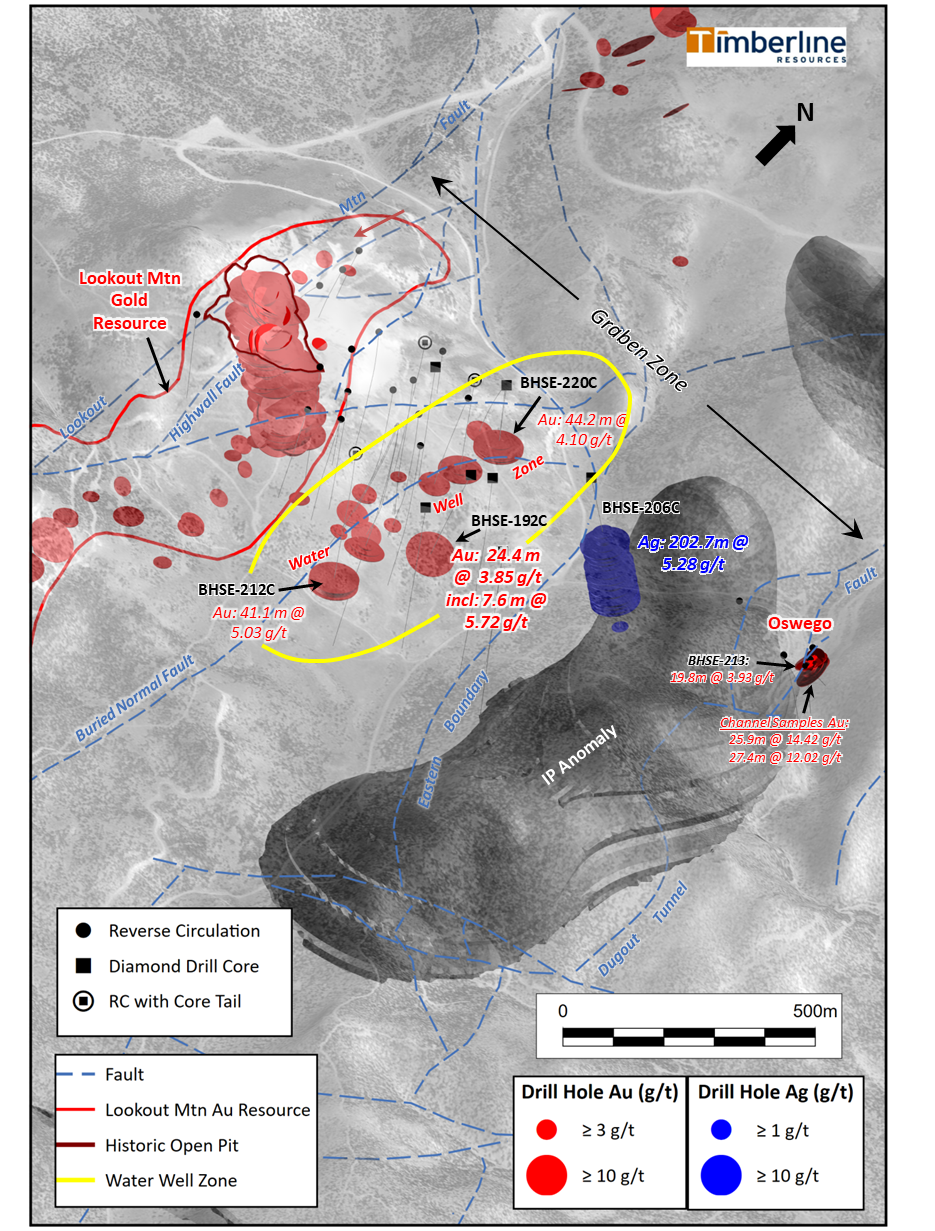 BHSE-192C was drilled on an azimuth of 300° at an initial inclination of -65°. The hole was designed to pass through an interpreted fault zone and penetrate the base of the east-dipping Dunderberg Shale. BHSE-206C was inclined -75° in a northeast direction (azimuth 050°) and designed to assess the upper reaches of the large IP chargeability anomaly identified in 2021.

Drillhole BHSE-192C was collared in the post-mineral volcanic rocks that occupy the Graben Zone east of the Lookout Mountain resource. The Cambrian-aged Windfall Formation was encountered at approximately 56m depth. The Windfall is a gray to orange (variably oxidized) thin-bedded limestone or silty-carbonate with frequent argillaceous layers or partings. In this area, the unit is highly faulted and brecciated, resulting in significant amounts of fault gouge and some core loss. The drillhole passed into the Dunderberg Shale at approximately 202m depth. The blue gray to greenish Dunderberg alternates between bedded and massive mudstone and is calcite-veined throughout. The upper portions of the unit exhibit frequent argillaceous partings and more reactive (carbonate-rich) bands. There is also ample evidence of faulting and brecciation. Fine-grained disseminated pyrite is first noted at approximately 210m depth, but there are several intervals of oxidation associated with faulting.

The gold zones occur near the base of the Dunderberg, but the highest-grade assays in the hole (13.75 g/t and 8.41 g/t Au) occur above the basal (carbonaceous and silicified) breccias that have characterized much of the WWZ. The upper zone of mineralization is associated with very fine-grained argillaceous mudstones that are sheared and brecciated, but not highly silicified or carbonaceous. The contact with the underlying Hamburg Dolomite is marked by approximately 8m of black, brecciated, silicified breccias containing sooty pyrite, and this interval is consistently rich in gold. Low levels of anomalous gold continue for at least 30m into the light-gray massive dolomite of the Hamburg, in which the hole was terminated.

BHSE-206C passed through a thick section of limestones – often highly fractured, brecciated, and variably oxidized – that are often anomalous in silver and arsenic in zones of fault breccia and gouge. The degree of brecciation and alteration increases with depth as the limestone passes into a chaotic interval of interbedded sanded dolomite (altered) and fine grained felsic intrusive rock with abundant pyrite, which locally exceeds 10%. The felsic dikes or sills begin at approximately 95m depth. The intrusive unit is light gray to green, fine-grained and has apparent granitic composition, termed an aplite. The aplite has been propylitically altered, evidenced in part by the presence of chlorite, calcite, and sericite.

Gold and silver are most abundant in the dolomite, particularly where it is highly fractured and brecciated. There is a good correlation between the presence of pyrite, gold, and silver, but the most intense silver mineralization is associated with a zone of iron oxide occurring between 270m and 321m depth. Arsenic is a well-known pathfinder element for Carlin-type gold, but it is also associated with the older silver-lead-zinc CRD mineralization in the Eureka District. Almost the entirety of this drill hole is enriched in arsenic, but local anomalies in elements such as bismuth, molybdenum and tungsten support the interpretation of nearby intrusive activity that may be driving the abundant silver (0.05 – 61.3 ppm), lead (2 – 7,000 ppm), and zinc (9 – >10,000 ppm) in the Graben Zone.

Pyrite increases as the drill hole passes into a light gray to pale green, fine-grained section of altered sediments, which may be affected by contact metamorphism from nearby intrusive rocks. The hole was terminated in an interval with abundant chlorite-sericite-pyrite veining and considerable evidence of faulting (brecciation and fault gouge).

Superimposed mineral systems are common and considered favorable in larger Carlin-type gold districts. The Ruby Hill – Archimedes Mine (i80 Gold Corp.), north of the Eureka Project, is an excellent example where millions of ounces of Carlin-type gold resources are reported to occur as overprinting earlier silver (gold) – lead – zinc mineralization. Similarly, at least three generations of mineralization are reported in the giant Carlin Trend District. The multiple generations of mineralization may have used the same fluid pathways in the rocks; plus, the earlier stage alteration and mineralization may have enhanced the receptiveness of the host rocks to the later Carlin-type fluids. Timberline is ramping up for its 2022 exploration program, which will target the Water Well Zone, the Oswego Target, and the huge IP anomaly that occupies the graben in between.

Cutting and sampling of core samples was directed by Timberline representatives. Personnel from Timberline or the drilling contractors transported the samples to Timberline’s secure Eureka facility, from which the samples were picked up by personnel from ALS USA Inc. (ALS) for sample preparation in Elko, Nevada or Tucson, Arizona. Quality control was monitored by the insertion of numerous blind certified standard reference materials, field duplicates, and blanks into each sample shipment. Drill samples were assayed by ALS for gold by fire assay of a 30-gram charge with an AA or ICP-ES finish (ALS code Au-AA23). The overlimits for gold samples assaying above 10 g/t were determined by a 30-gram fire assay with gravimetric finish. Satisfactory results were achieved for all quality control samples related to the data reported herein. In addition, gold mineralized samples were submitted for multi-element analysis (33 elements) by four-acid digestion and ICP-ES determination (code ME-ICP61).

Steven Osterberg, Ph.D., P.G., Timberline’s Vice President Exploration, is a Qualified Person as defined by National Instrument 43-101 and has reviewed and approved the technical contents of this release. Dr. Osterberg is not independent of the Company as he is an officer.

Timberline Resources Corporation is focused on delivering high-grade Carlin-Type gold discoveries at its district-scale Eureka Project in Nevada. The Eureka Property includes the historic Lookout Mountain and Windfall mines in a total property position of approximately 24 square miles (62 square kilometers). The Lookout Mountain Resource was reported in compliance with Canadian NI 43-101 in an Updated Technical Report on the Lookout Mountain Project by Mine Development Associates, Effective March 1, 2013, filed on SEDAR April 12, 2013 (see Cautionary Note to US Investors below).

The Company is also operator of the Paiute Joint Venture Project with Nevada Gold Mines in the Battle Mountain District. These properties lie on the prolific Battle Mountain-Eureka gold trend. Timberline also controls the Seven Troughs Project in northern Nevada, which is one of the state’s highest-grade former gold producers. Timberline controls over 43 square miles (111 square kilometers) of mineral rights in Nevada. Detailed maps and mineral resources estimates for the Eureka Project and NI 43-101 technical reports for its projects may be viewed at https://timberlineresources.co/.

Cautionary Note to U.S. Investors: The terms “mineral resource,” “measured mineral resource,” “indicated mineral resource” and “inferred mineral resource,” as used on Timberline’s website and in its news releases are Canadian mining terms that are defined in accordance with National Instrument 43-101 – Standards of Disclosure for Mineral Projects (“NI 43-101”). These Canadian terms are not defined terms under United States Securities and Exchange Commission (“SEC”) Industry Guide 7 and are normally not permitted to be used in reports and registration statements filed with the SEC by U.S. registered companies. The SEC permits U.S. companies, in their filings with the SEC, to disclose only those mineral deposits that a company can economically and legally extract or produce. Accordingly, note that information describing the Company’s “mineral resources” is not directly comparable to information made public by U.S. companies subject to reporting requirements under U.S. securities laws. U.S. investors are urged to consider closely the disclosure in the Company’s Form 10-K which may be secured from the Company, or online at http://www.sec.gov/edgar.shtml.