VANCOUVER, British Columbia, Aug. 02, 2022 (GLOBE NEWSWIRE) — Novo Resources Corp. (“Novo” or the “Company”) (TSX: NVO, NVO.WT & NVO.WT.A) (OTCQX: NSRPF) is pleased to provide an update on gold and nickel-copper targets at Purdy’s North on EL47/1745 and on the Maitland Intrusion (EL47/3443) in the West Pilbara region of Western Australia. Purdy’s North is adjacent to Azure Minerals Limited’s (“Azure”) Andover VC-07 nickel-copper-cobalt massive sulphide discovery (“Andover”) and Artemis Resources Limited’s (“Artemis”) Carlow Castle gold-copper-cobalt discovery (“Carlow Castle”). It should be noted that there is no certainty that EL47/1745 nor EL47/3443 contains the same levels of mineralization as either of these discoveries1.

“We are excited to get on the ground at these drill targets,” commented Mr. Mike Spreadborough, Novo’s Executive Co-Chairman, Acting CEO, and director. “This is a highly prospective region and there has been well-documented recent exploration success from our neighbours, including Azure Minerals and Artemis Resources. These projects are an important part of our broader exploration strategy and we look forward to seeing what our drilling program returns.”

An initial 5-day heritage survey was completed at both Purdy’s North and further south on the Maitland Intrusion, clearing several prospects for access, with a second 5-day survey currently in progress.

Several of the extensive high-order copper, nickel geochemical anomalies at Purdy’s North, initially defined by surface soil sampling and mapping have now been tested by either IP or FLEM surveys or a combination of both. A high resolution aeromagnetic/radiometric survey was also completed across Purdy’s North and the Bob’s Well VHMS trend. Results from this detailed technical work have been utilised to finesse original targets generated by mapping and surface sampling in late 2021. 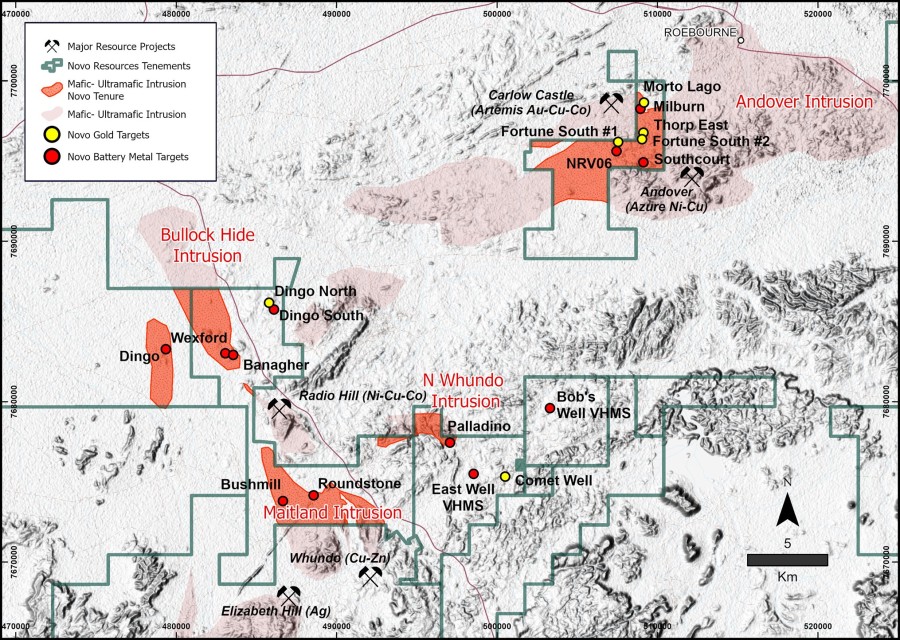 The Milburn and Morto Lago prospects are located 1.5 km due east of Carlow Castle. At Milburn, the target is a discrete Electromagnetic geophysical (“EM”) anomaly up to 300 m long and 200 m wide, overlaying a gabbro and meta-basalt contact. Two copper-nickel-gold occurrences in historic workings are present on the edge of the EM anomaly and are associated with the NNW trending sheared basalt-gabbro (intrusion) contact with anomalous copper. At Morto Lago, the target is a gold-quartz vein system that manifests as a 70 m wide subcrop over 350 m in an outwash claypan, mostly obscured by regolith, but with significant rock chip gold assay results (up to 6.63 g/t gold). Recently discovered is the Morto Lago North trend, where a complex array of malachite bearing sulphidic veins sub-crop in outwash plains over several hundred metres strike and 100m width, with pXRF values of >2000 ppm arsenic and 101 ppm gold (these pXRF values are likely indicative of gold being present, but do not accurately reflect gold grade).

The Bushmill historic EM anomaly is located 5 km south of the Radio Hill nickel-copper-cobalt Project. The VTEM target is located in the sheared northwest corner of the Maitland Intrusion and manifests as a single weak to moderate conductor at a depth of approximately 75 m. The EM plate is obscured by sand, gravel, and clay which has previously made surface sampling ineffective. Down-hole EM (DHEM) will be conducted on all nickel targets drilled. 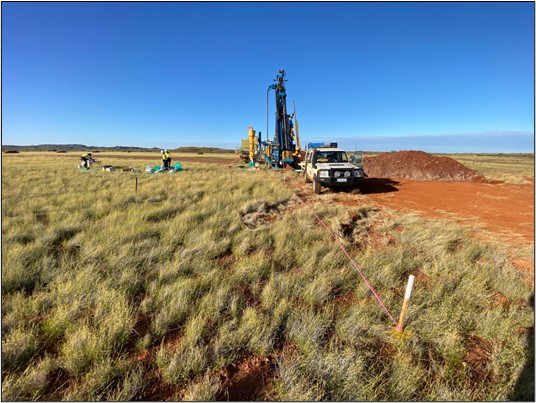 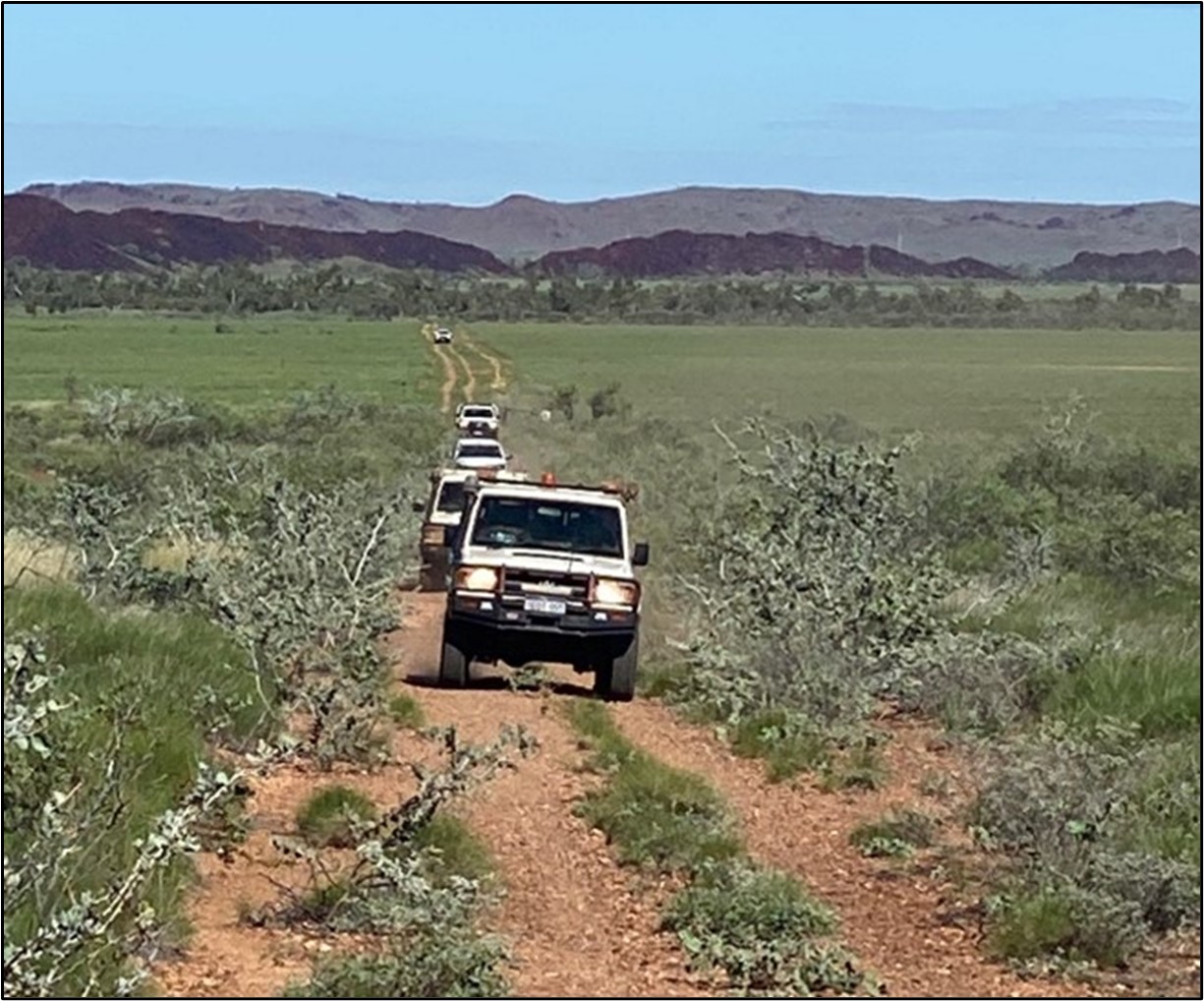 The pXRF assay technique utilized a Niton XL5 handheld XRF machine. The Niton is calibrated daily, with 4 QAQC standards (fit for purpose including certified Ni, Cu and Co values) run concurrently, with an additional 2 standards checked per 100 readings and 4 QAQC standard assayed before the machine is shut down. pXRF is utilized as a preliminary exploration technique for base metals. Rock chip samples are point analysed for 90 seconds using 4 machine filters. The pXRF is a spot reading device and has diminished precision due to grainsize effect, especially on rock samples where peak results represent a window of < 10mm field of view.

Rock chip samples were assayed by Intertek Genalysis in Perth, Western Australia and were crushed and pulverized and assayed for Au by four acid digest and 50 g charge fire assay FA50/OE and for 48 multielement using four acid digest – MS finish (4A/MS). QAQC protocols included 12 standards and blanks in the two batches with Morto Lago rock chip samples, representing 10% QAQC. No QAQC issues were detected. All relevant data was verified by a qualified person as defined in National Instrument 43-101 Standards of Disclosure for Mineral Projects (“NI 43-101”) by reviewing analytical procedures undertaken by Intertek Genalysis.

Table 1 – All rock chip samples from the Morto Lago subcrop

Dr. Quinton Hennigh (P.Geo.) is the qualified person, as defined under NI 43-101, responsible for, and having reviewed and approved, the technical information contained in this news release. Dr. Hennigh is the non-executive co-chairman and a director of Novo.

Novo operates its flagship Beatons Creek Project while exploring and developing its prospective land package covering approximately 11,000 square kilometres in the Pilbara region of Western Australia. In addition to the Company’s primary focus, Novo seeks to leverage its internal geological expertise to deliver value-accretive opportunities to its shareholders. For more information, please contact Leo Karabelas at (416) 543-3120 or e-mail leo@novoresources.com.

On Behalf of the Board of Directors,

Some statements in this news release contain forward-looking information (within the meaning of Canadian securities legislation) including, without limitation, that DHEM will be conducted on all nickel targets drilled at Bushmill. These statements address future events and conditions and, as such, involve known and unknown risks, uncertainties and other factors which may cause the actual results, performance or achievements to be materially different from any future results, performance or achievements expressed or implied by the statements. Such factors include, without limitation, customary risks of the resource industry and the risk factors identified in Novo’s management’s discussion and analysis for the three-month period ended March 31, 2022, which is available under Novo’s profile on SEDAR at www.sedar.com. Forward-looking statements speak only as of the date those statements are made. Except as required by applicable law, Novo assumes no obligation to update or to publicly announce the results of any change to any forward-looking statement contained or incorporated by reference herein to reflect actual results, future events or developments, changes in assumptions or changes in other factors affecting the forward-looking statements. If Novo updates any forward-looking statement(s), no inference should be drawn that the Company will make additional updates with respect to those or other forward-looking statements.