Novo exercised its option over the Malmsbury Project to earn a 50% interest, and the right to earn an additional 10% interest by incurring A$5 million in exploration expenditure over a four-year period2.

“The latest results from diamond drilling on the Malmsbury Project continue to look encouraging and will be complemented by the planned geophysics later in the year,” commented Ms. Kas De Luca, Novo’s GM, Exploration. “3D modelling and targeting by the joint venture later in the year will be a critical step in advancing the Malmsbury Project, and the intrusion related gold mineralization will form an important part of understanding the overall system.” 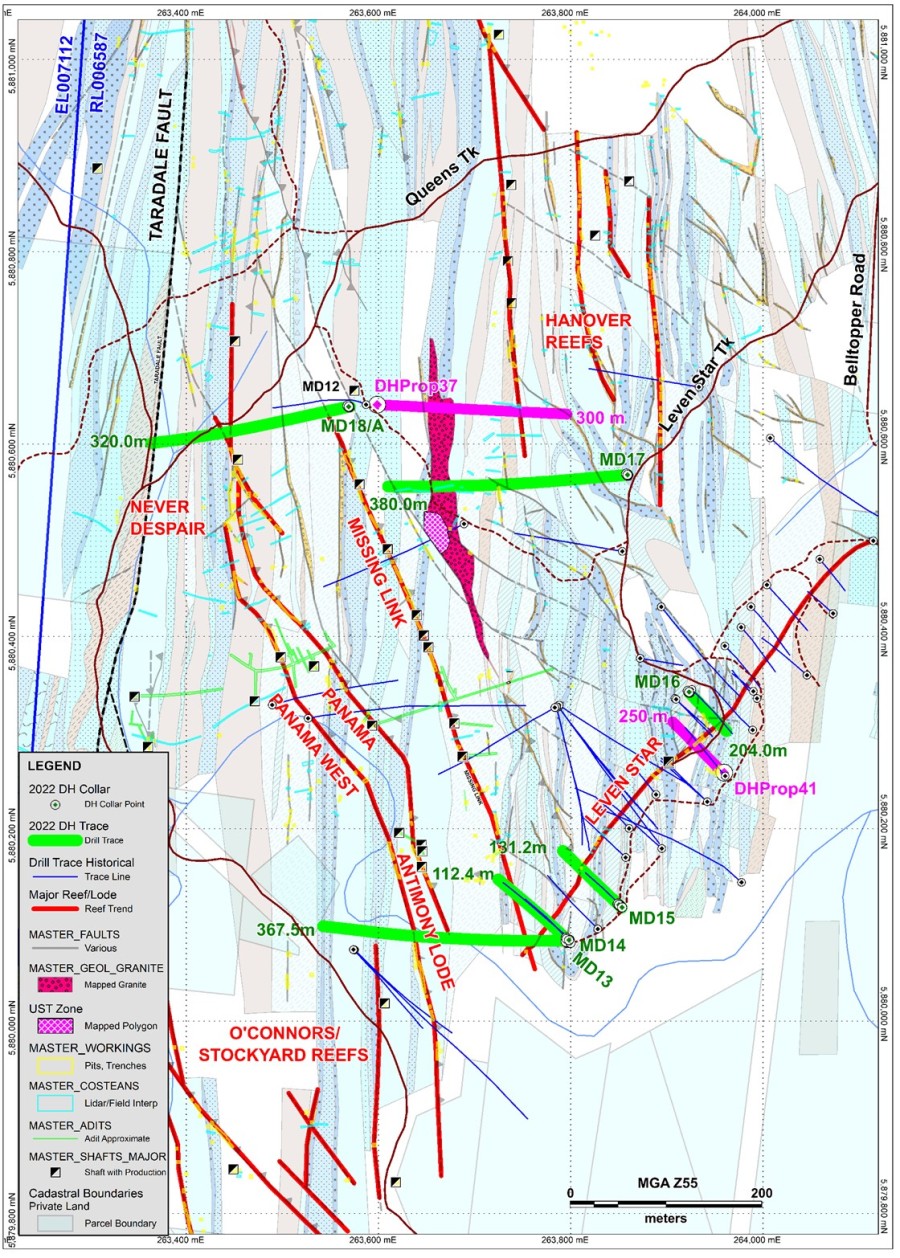 Approximately 2,525 m (8 holes, 1 in progress and 1 planned) of an expanded circa 2,800 m diamond drilling program have been completed through the end of May at the Malmsbury Project. At the time of writing, gold and multi-element assays from four of eight holes completed have been returned. Significant results from the first three of these holes (MD13, MD14 & MD16) were reported previously2.

Drill hole MD17 was drilled to 380 m in a westerly direction to test the recently discovered Missing Link Monzogranite at depth, in addition to the Missing Link and Hanover West historic gold reefs. This hole aimed to determine the geometry and gold endowment of the intrusion and targeted the monzogranite for its potential as an IRGS, in addition for the potential for orogenic vein style mineralization. 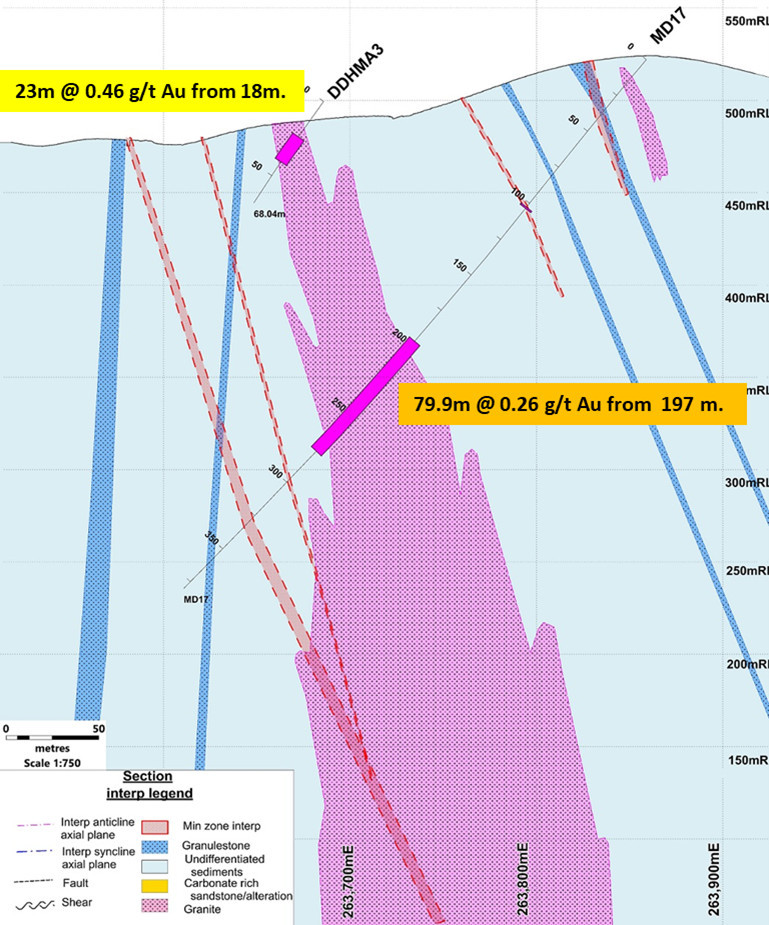 MD17 successfully intersected the Missing Link Monzogranite between 204 m – 269 m down hole, in addition to a smaller and potentially parallel shallow sub-surface granite dyke interpreted in strongly oxidised material near the collar. Drilling confirms a steep (70 – 80°) east-dipping geometry for the intrusive that widens noticeably at depth. The intrusive is characterized by strong sericite alteration and disseminated sulphides throughout with regular intervals of planar white quartz-sulphide stockwork veining. A distinct 1 m-wide sulphide-shear-breccia within strongly quartz veined sandstone occurs within a metre of the upper granite contact.

Drill hole MD17 was sampled in two stages, with priority given to sampling across the monzogranite interval and contact zones. Gold assays recently returned from the priority sampling only are presented here. The remainder of gold assays from MD17 (second stage), in addition to very recently returned multi-element data are still in QAQC and review and will be reported once fully interrogated.

Table 1 below outlines the significant intersection returned (gold only) for the priority sampled portion of MD17. The intersection was calculated using parameters that include a 0.1 g/t Au cut-off and no more than 5 m internal waste and are considered appropriate for reporting wider and typically more diffuse gold values associated with mineralised intrusive occurrences. The reported intersection in Table 1 is considered close to true width.

Results referred to in this news release are not necessarily representative of mineralization throughout the Malmsbury Project.

Diamond drilling continues at Malmsbury with two additional priority diamond holes to be included in the current drilling program based on recent success, including: 1) a circa 80 m step-out hole north of MD17 to test the Missing Link Monzogranite in an area of significant Au-in-soil and rock chips; and 2) an additional hole on the Leven Star Reef to test a potential high-grade shoot identified in recently reported significant results from MD162.

The work program moving forward will involve a larger second phase of drilling to both build on current success and test remaining high-priority targets not drilled in the current round. This is scheduled for late 2022 or 2023 pending rig availability.

The diamond drill core was sampled by cutting the core in half longitudinally. Samples were cut to geological boundaries or to a preferred length of 1.0 m. The core was halved along the plane of orientation using a diamond saw and the upper half of the core dispatched for analysis and the lower half returned to the core tray in its original orientation. Sampling interval lengths range from 0.3 m up to 1.3 m. Core loss zones greater than or equal to 0.2 m are recorded. Sampling does not cross core loss zones of greater than or equal to 0.3 m. Depending on their relationship to potential mineralization, zones with core loss less than 0.3 m and greater than 0.1 m can terminate a sampling sequence or be included within a sample interval with the percentage of sample recovery recorded. Where core loss cannot be specifically attributed, the percentage of sample recovery is recorded.

All core samples were crushed and pulverised (ALS CRU-21/PUL-23) and sub-sampled for fire assay and multi-element analysis (ALS Au-AA26, ME-MS61).

Drill core duplicates are inserted at a rate of one sample every 25. To produce a duplicate sample, the whole core sample is first cut in half, with half of the core returned to the tray. The other half is then quartered with one quarter used as a primary sample and the other as the duplicate.

Blanks and standards are inserted at a rate of eight samples in 100, with three OREAS CRM standards (OREAS 232, OREAS 239, OREAS 264) and one blank (OREAS C26d) systematically repeated.

No QAQC issues were detected. All relevant data was verified by a qualified person as defined in National Instrument 43-101 Standards of Disclosure for Mineral Projects (“NI 43-101”) by reviewing analytical procedures undertaken by ALS.

Dr. Christopher Doyle (MAIG) is the qualified person, as defined under NI 43-101, responsible for, and having reviewed and approved, the technical information contained in this news release. Dr. Doyle is Novo’s Exploration Manager – Victoria & Project Generation.

Novo operates its flagship Beatons Creek gold project while exploring and developing its prospective land package covering approximately 11,000 square kilometres in the Pilbara region of Western Australia. In addition to the Company’s primary focus, Novo seeks to leverage its internal geological expertise to deliver value-accretive opportunities to its shareholders. For more information, please contact Leo Karabelas at (416) 543-3120 or e-mail leo@novoresources.com.

On Behalf of the Board of Directors,

Some statements in this news release contain forward-looking information (within the meaning of Canadian securities legislation) including, without limitation, that remaining assays for the drilling program are expected over the coming months, that positive gold assays from the current diamond drilling further validate the potential for an intrusion hosted and/or IRGS at the Malmsbury Project, and that the drilling and forward work programs described in the news release will be undertaken at the Malmsbury Project. These statements address future events and conditions and, as such, involve known and unknown risks, uncertainties and other factors which may cause the actual results, performance, or achievements to be materially different from any future results, performance or achievements expressed or implied by the statements. Such factors include, without limitation, customary risks of the resource industry and the risk factors identified in Novo’s management’s discussion and analysis for the three-month period ended March 31, 2022, which is available under Novo’s profile on SEDAR at www.sedar.com. Forward-looking statements speak only as of the date those statements are made. Except as required by applicable law, Novo assumes no obligation to update or to publicly announce the results of any change to any forward-looking statement contained or incorporated by reference herein to reflect actual results, future events or developments, changes in assumptions or changes in other factors affecting the forward-looking statements. If Novo updates any forward-looking statement(s), no inference should be drawn that the Company will make additional updates with respect to those or other forward-looking statements. 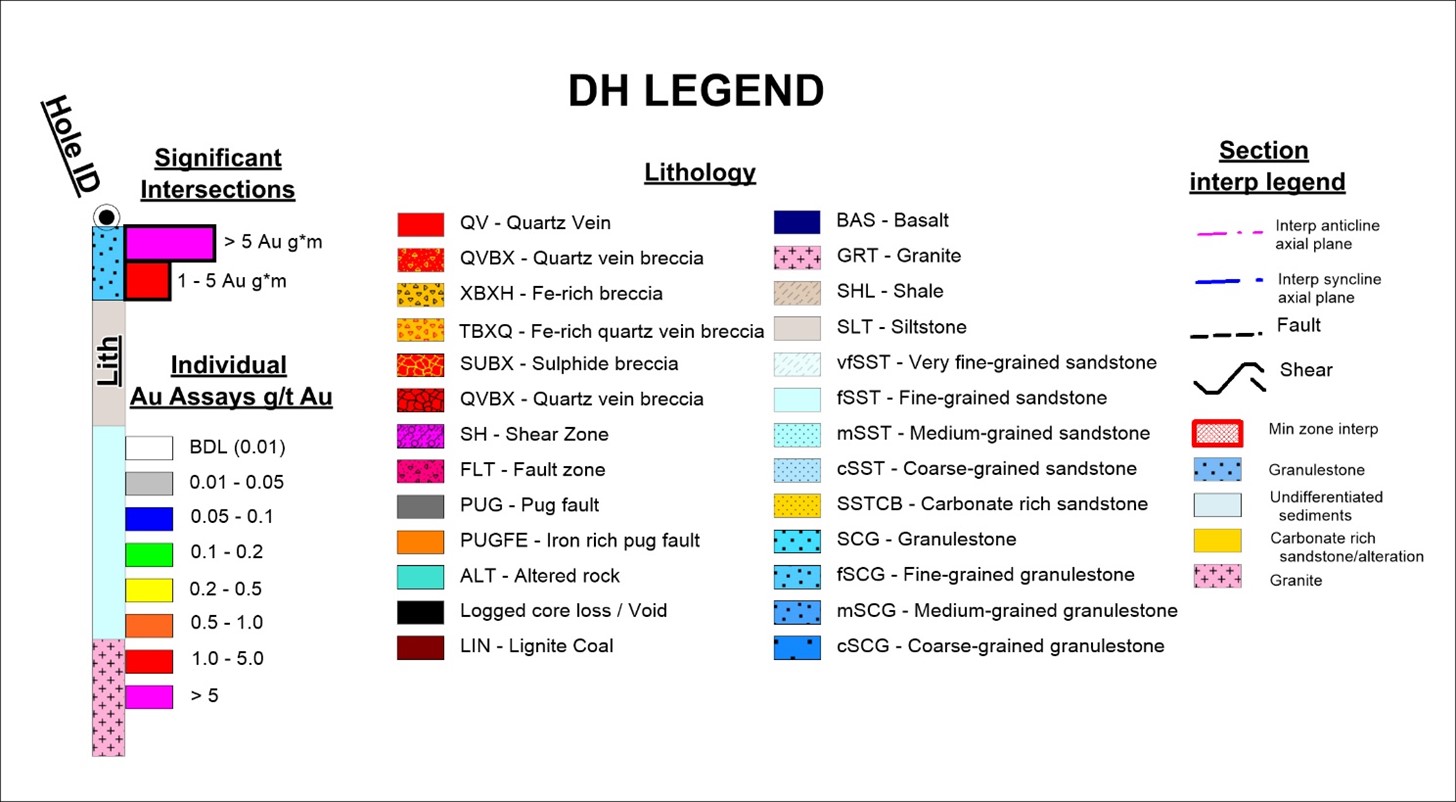