SODANKYLÄ, FINLAND – (November 18, 2022) – FireFox Gold Corp. (TSX.V: FFOX)(OTCQB: FFOXF)(“FireFox” or the “Company”) is pleased to announce that it has completed a small drilling program aimed primarily at offsetting the newly discovered high-grade zone in the East Target at its Mustajärvi Project in Finland. The Company drilled 6 shallow diamond core holes at Mustajärvi totaling 977 metres.

FireFox announced on July 13, 2022, that its May drill program at Mustajärvi had returned the best drillhole yet on the project (22MJ006: 13.85m at 14.39 g/t gold), and that the mineralization encountered in this new zone occurs very near surface (less than 20.0m vertical). Subsequent screen fire assays identified significant coarse gold in one of the samples. The results from the more rigorous screen fire assays returned a calculated total gold for one of the samples of approximately 227.4 g/t gold. All other high-grade (>10.0 g/t) samples within the interval were confirmed by multiple 50-gram fire assays with gravimetric finish and by the 1,000-gram screen fire assays. The resulting new weighted average for the interval in drill hole 22MJ006 was 13.85m at 28.74 g/t gold (See Company news release dated September 6, 2022).

After observing apparent cross structures in the drill core from the East Target, the FireFox team designed a drill program with 5 holes to test the alternative direction and also explore for expansions of the new shallow high-grade zone. Drillholes 22MJ021, -22, and -23 were directed to the northeast instead of to the north-northwest, which has been the prevailing drill direction at Mustajärvi. Two additional holes (22MJ024 and -025) were drilled parallel to 22MJ006 to test for continuations of the high-grade zone to depth and to the southwest. The sixth hole was also aimed at testing for the cross structures, but at the Northeast Target, a few hundred metres away. All the holes in this program were of modest depth, five of the six ranged between 100 and 160m depth, and one hole was drilled to 267m.

FireFox’s CEO, Carl Löfberg, commented about the recently completed drill program, “It is uncommon in gold exploration today to encounter such thick intervals of high-grade at less than 20 metres below surface, so we moved quickly to follow-up on our last drill results with these several shallow drill holes. It was also a great opportunity to test our observations that suggest some new controls on the mineralization in the East Target. Success in these recent drillholes would result in a considerable expansion of the newest high-grade zone. We look forward to reporting the results from this drill program in a few weeks.”

Geologic Details of the East Target

Drillhole 22MJ006 was the sixth drillhole along approximately 1.5km of strike of the Mustajärvi Shear Zone that penetrated more than 90 gram-metres of gold, expressed as grade – thickness (thickness of significant interval in metres multiplied by the weighted average gold content in grams per tonne). Most of these intervals have been reported from drill holes directed to the north-northwest, perpendicular to the Mustajärvi Shear Zone, because that has been shown to be an important controlling direction for the gold mineralization. In several instances, FireFox geologists have noted crossing structures that also appear to host significant alteration, veining, and gold. The most recent intercepts from the East Target indicate that the cross structures may be very important in this area and could expand the thickness of the mineralization.

The host rocks at the East Target also seem to include more sedimentary rocks (laminated siliciclastic rocks) and mafic volcanics or intrusions than have characterized either the Central Zone or the Northeast Target. These important observations about changes to the mineral system as it trends to the northeast were strong drivers for the latest follow-up drilling. 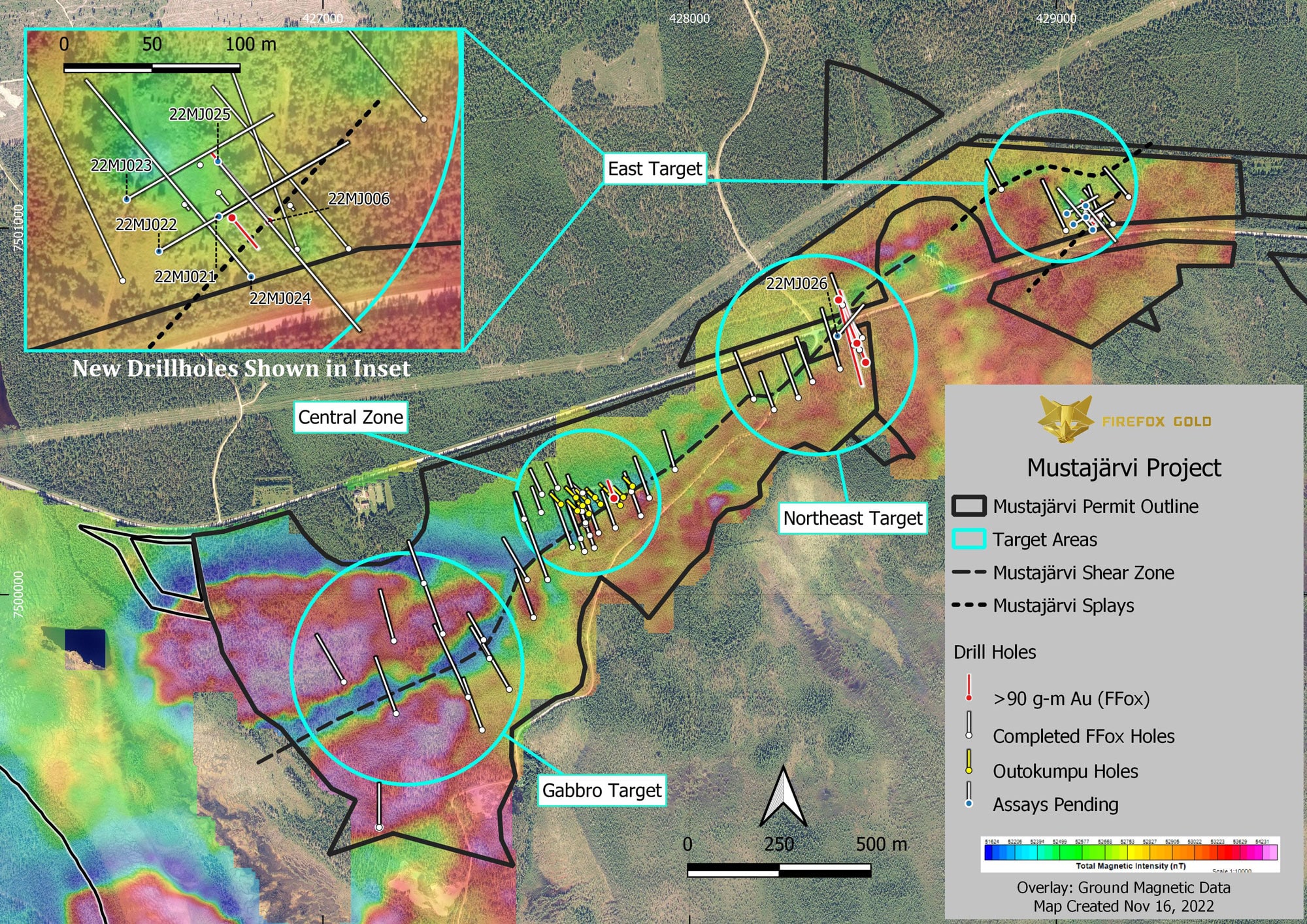 Patrick Highsmith, Certified Professional Geologist (AIPG CPG # 11702) and director of the Company, is a qualified person as defined by National Instrument 43-101. Mr. Highsmith has helped prepare, reviewed, and approved the technical information in this news release.

Finland is one of the top mining investment jurisdictions in the world as indicated by its multiple top-10 rankings in recent Fraser Institute Surveys of Mining Companies. Having a strong mining law and long mining tradition, Finland remains underexplored for gold. Recent exploration results in the country have highlighted its prospectivity, and FireFox is proud to have a Finland based CEO and technical team.

For more information, please refer to the Company’s website and profile on the SEDAR website at www.sedar.com.

The information herein contains forward looking statements that are subject to a number of known and unknown risks, uncertainties and other factors that may cause actual results to differ materially from those anticipated in our forward-looking statements. Factors that could cause such differences include: changes in world commodity markets, equity markets, the extent of work stoppage and economic impacts that may result from the COVID 19 virus, costs and supply of materials relevant to the mining industry, change in government and changes to regulations affecting the mining industry.

VERSES Partners with Blue Yonder for the Resale of Adaptive Intelligence Solutions for the Global Supply Chain
November 29, 2022